Everything You Need to Know About Saffron Tea

Advantages and Disadvantages of Saffron Tea

Saffron is a sought-after spice that has a long and rich tradition. It’s an essential ingredient in many dishes in Europe, the Middle East, India, and Europe and today, adding its deep red color along with a sweet earthy taste to foods.

Although the exact source of saffron’s origins is unknown, its therapeutic use has been documented throughout history. Cleopatra took a bath in saffron-infused waters to supposedly enhance beauty and aphrodisiac properties, and the Greco-Roman doctors prescribed it to treat a wide range of illnesses, including:

Saffron tea is loaded with minerals, vitamins, as well as antioxidants. It can offer significant health benefits.

Since it is harvested by hand, It is also one of the world’s highest-priced spices. It is common for suppliers to mix it with other ingredients or employ inferior sources to save money. When purchasing saffron tea, make sure you select an established brand to ensure the highest nutritional content of your tea.

One teaspoon of saffron has the following:

Saffron is a great source of:

Saffron can also be a good supply of copper. This mineral assists in the maintenance of the body’s nervous system and aids in the creation of red blood cells and also acts in the role of an antioxidant to protect cells from damage that could cause chronic illness. 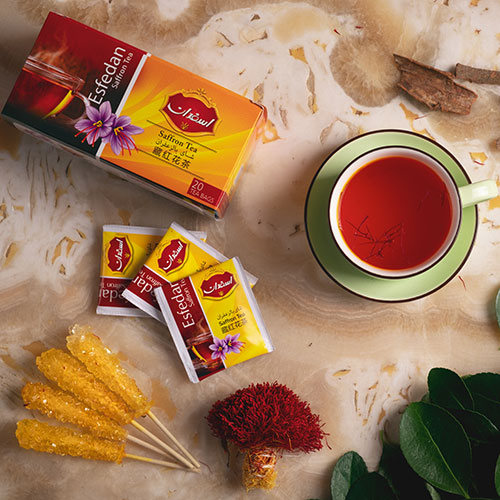 Saffron tea is high in nutrients which scientists continue to research to determine their health benefits. It is for instance, it has the antioxidants crocetin and crocin, which can help improve memory performance. Researchers believe these antioxidants could help combat diseases affecting the brain, such as dementia and Parkinson’s.

Fluctuating levels of hormones like serotonin cause menstrual discomfort and pain in women. Because saffron tea could increase serotonin levels in women, it has been examined for its potential to alleviate symptoms associated with menstrual cycles.

One study revealed that women who took saffron during their menstrual cycle had 50 percent fewer cramps, bloating, irritation and fatigue than women who didn’t.

Both crocin as well as crocetin act as antioxidants known as carotenoid plants, which give saffron its luscious red hue. Research has shown that they can be anti-cancer and antitumor within the body. However, further research is required to determine the effects on humans.

However, saffron tea has other antioxidants known to shield your body from cell destruction. This harm can be caused by factors such as aging, environmental factors and lifestyle. It is associated with a variety of chronic illnesses, such as cancer.

Saffron is one the most abundant sources of Riboflavin, an essential B-vitamin that aids in maintaining an optimum body immune system. It helps fight inflammation within the body, which could lead to chronic illnesses like cancer. Additionally, some studies suggest it can shield your brain against brain-related diseases as well as migraines.

Safranal is also present in Saffron tea, an antioxidant that can enhance the antibacterial and antiviral activities within your body. Safranal is also believed to enhance sleep quality and promotes healthy immunity and overall health.

Saffron is thought to be as safe for most people and is an essential ingredient in many food items. Drinking tea containing saffron in massive quantities can be dangerous; however, speak to your doctor prior to adding saffron-based tea to your diet. Also, consider the following health hazards:

People who have an allergy to olives could also suffer from a saffron-related allergy.

Certain studies have revealed that saffron could trigger the contractions of the uterus and is recommended to be avoided by pregnant women.

Saffron consumption can alter your heart rate. Although research on the subject isn’t conclusive, it can cause a worsening of symptoms for patients with heart issues.

Because saffron may lower your blood pressure, you’re best to stay clear of drinking saffron tea when you have already been diagnosed with low blood pressure.