How does Saffron Work for Depression

How Does Saffron Work for depression?

Saffron is a spice that goes well with fish, rice, tomatoes, and garlic. It comes from Persian civilizations’ traditional medicine. It has been used as a culinary herb and a potent medicinal for millennia. Saffron is renowned for its bright color and taste, as well as being the most expensive spice on the planet and Iranian saffron is known to be the purest saffron in the world.

Saffron has been used as a sedative, antidepressant, and anti-inflammatory for centuries. This lovely plant also has the gastrointestinal benefit of relaxing the muscles of the digestive system, which helps digestion and reduces spasms, as well as being an appetite stimulant. In this article, we would like to discuss the connection between saffron and depression. How does saffron work for depression? What’s the connection between saffron and depression?

Contents hide
1 How Does Saffron Work for depression?
1.1 Saffron Research for Mood Support
1.2 Adjunctive Therapy for Depressed and Anxious Patients
1.3 For a Gut Reaction
1.4 Saffron as a Supplement and in Your Diet 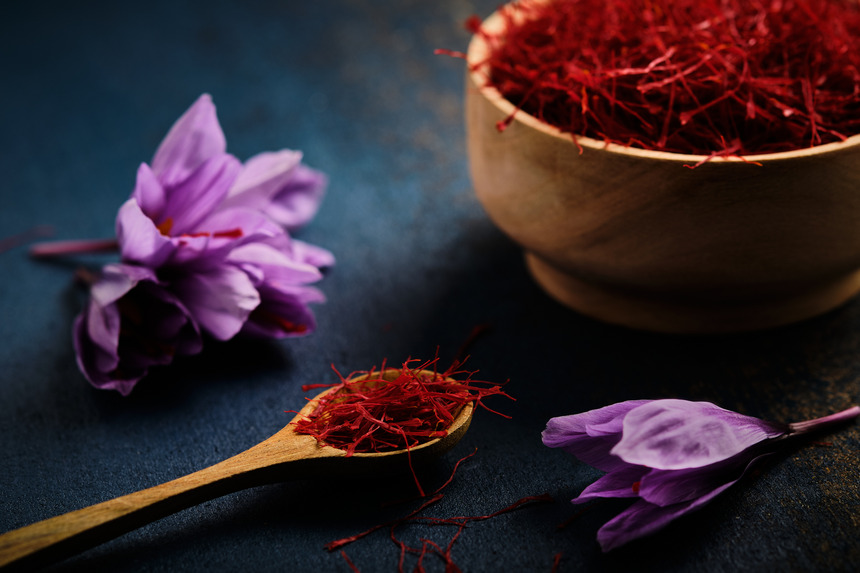 The stigma (the apex of the plant where the pollen resides, which is officially termed the ‘saffron’) and petal of the Crocus sativus plant both offer comparable mood effects, according to a number of studies. Animal studies indicate that the crocus plant components safranal and crocin may have antidepressant effects by balancing dopamine, norepinephrine, and serotonin levels.

Both anxiety and sadness have been shown to be beneficial in human studies. For an 8-week double-blind randomized Iranian study, 40 adult depressive outpatients were randomly allocated to receive either a 15 mg capsule of Crocus petal in the morning and evening or 10 mg of Fluoxetine (Prozac) in the morning and evening. Petal of the Crocus was shown to be equally effective as the medication at the conclusion of the experiment. With 17 of 20 patients, fluoxetine (Prozac) had an 85 percent response rate, whereas crocus had a 75 percent responder rate.

Researchers discovered that when patients were given the Hamilton Depression Scale, a well-known questionnaire used to evaluate mood, they had substantially better outcomes than when they were given imipramine (an older type tricyclic antidepressant medication).

The most recent assessment of research, published in 2014, looked at 14 trials that utilized saffron as an anti-depressant. Saffron was found to be as effective as Donepezil (Aricept), the main conventional medication for this difficult-to-treat aging condition, in this study. Some studies have shown that it may assist with weight reduction (by decreasing the urge to snack), while others have shown that it can help with PMS.

Saffron supplementation was also shown to be beneficial in substantially reducing depressive symptoms when compared to the placebo control in a second 2013 analysis that employed even stricter criteria for inclusion trials.

A 9-month study of 40 individuals with severe depression who were receiving standard psychiatric medications was recently published in Iran. Half of the participants took crocin, a key component of saffron, along with their medicine, whereas the other half took just the medications. When compared to the placebo group, the individuals who took the spice and medication combination had substantially better ratings for depression alleviation, anxiety relief, and overall health status.

Saffron may also be beneficial for sexual side effects. Another study discovered that saffron may successfully reduce antidepressant sexual adverse effects in males. It improved erectile dysfunction and boosted satisfaction, according to the males. Other herbals, such as ginkgo Biloba, have also been shown to help with this issue.

For a Gut Reaction

Antioxidant carotenoids (particularly the primary antioxidant crocin, a carotenoid that gives saffron its burned orange color) and B vitamins are abundant in saffron. Saffron is believed to affect the brain’s levels of neurotransmitters including dopamine, norepinephrine, and serotonin. Saffron’s antioxidants are also believed to assist the body clean up free radicals and protect brain cells from oxidative stress. People with mental disorders are known to suffer from oxidative stress.

We believe saffron’s potential to improve mood is due to its beneficial effects on the digestive system, where it may relax tense muscles. The digestive tract serves as a hub for both the immune system and the production of neurotransmitters. When our digestive system isn’t working properly, our immune system raises inflammation throughout our bodies, including our brain, contributing to any mood problem to which we are susceptible. And when our stomach isn’t working properly, our neurotransmitters (which, as Dr. Candace Pert put it, are our “emotional chemicals”) aren’t balanced, which means our mood suffers as well.

Saffron as a Supplement and in Your Diet

Saffron may be used in cooking. We constantly advise people to seek natural cures in their diet. While pills may be helpful in the healing process, learning to consume foods that contain these lovely herbs and the appropriate nutrients will help someone stay healthy in the long run.

In this article, we tried our best to discuss the connection between saffron and depression.