The History of Saffron, from Mythological Tales to Documented Facts

The History of Saffron, from Mythological Tales to Documented Facts

While the most debated aspect of saffron is its high price, the origin and history of saffron are still ambiguous. Here we are going to talk about the history of saffron, from its first appearance in myth and ancient relics. By the way, if you are still curious why saffron is so expensive, read our article Saffron Price: All You Need to Know Before Buying Saffron

For now, let’s have a closer look at the seasoning and its origin.

It is interesting to know that like many other plants, crocus also has a story in Greek mythology and ancient gods have an important role in its creation. There are different stories by the way which name the crocus flower and its creation.

The first version refers to Crocus as a young man who had an unhappy love affair with Smilax. In order to becalm his pains and agony, gods turned him into a plant and hence the name of the flower became Crocus after him. In this version, Smilax also turned into bindweed.

The other story is a repeated tale that you can find for other plants and mythological figures as well. In this version, Crocus was a companion of Hermes whom he accidentally killed in a discus game.  Then Hermes changed Crocus’ body into the flower in grief and the blood drops from his head turned into the saffron stigma.

The Documented History of Saffron

Putting the myth aside, it is time to seek the origin of saffron and the history behind it. Though it is still debatable where the plant first appeared, most sources mention either Greece or Asian countries like India and Iran as the original birth-place of the saffron flower, Crocus sativus. No matter which country is the original place in which saffron was being cultivated, almost all agree that saffron is native to the Mediterranean area, Asia Minor and Persia.

The main reason that many consider Greece as the birth-place of saffron may be the fact that saffron harvest appears in many palace frescoes in Crete starting from the 8th century BC.  These paintings show the special place of saffron in rituals and medicine. In one of these paintings, a woman (possibly a priestess) is holding a bowl of saffron and is coloring her lips and ears with saffron. Another painting depicts offering saffron to a goddess in the time of harvest.

These paintings and also the flower’s appearance on pots, bowls, and vases of the time depict its special place; not only in medicine and rituals but also in the economy of respective regions. 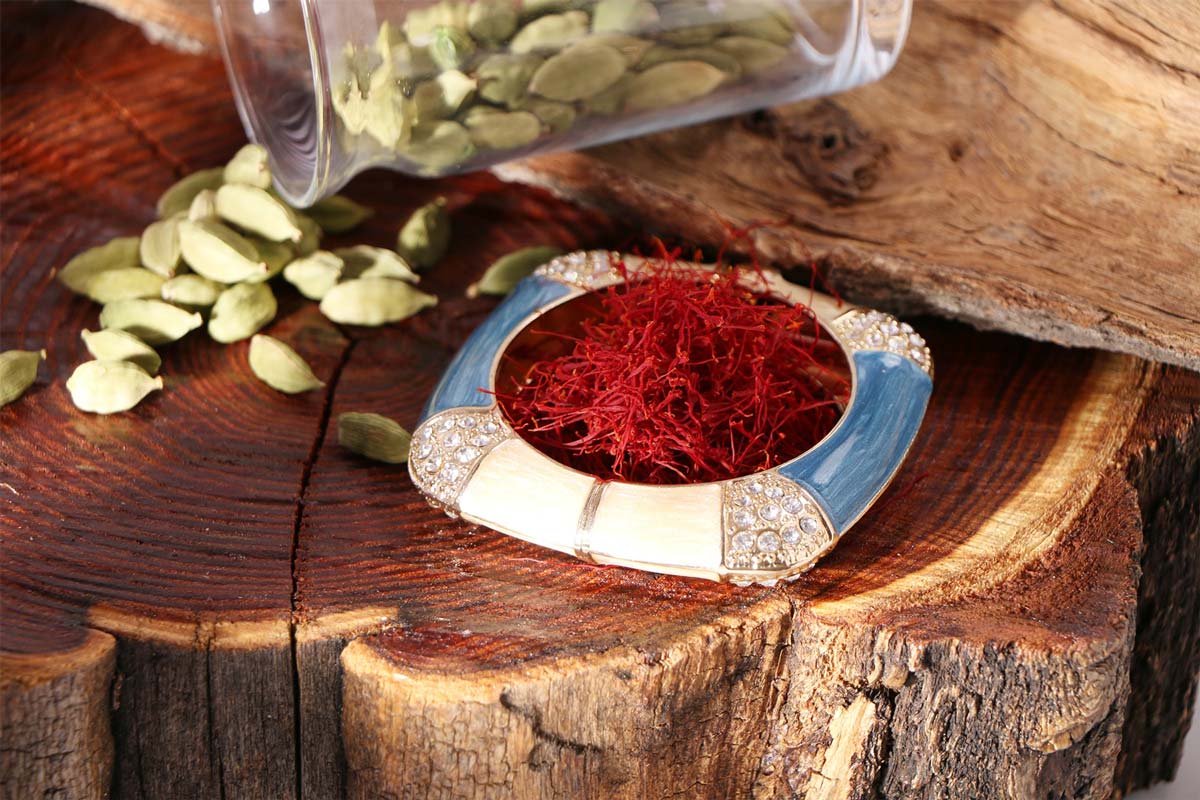 Saffron in the Middle-east

However, there are records of the use of saffron in middle eastern countries as well. There are saffron pigments in paintings in caves in Iraq for over 50000 years ago. Persians also used saffron stigma to dye royal carpet, rugs, and also funeral shrouds. They also used it as a perfume and also medicine.

Though foreigners and travelers highly suspected saffron due to its high Ecstatic effect, Alexander the Great used it first as an additive to his tea and later sprinkled it in bathwater. He believed saffron would heal his wounds (a custom probably after Darius, king of Iran).

Sumerians (the people of southern Mesopotamia or modern-day Iraq, Kuwait, eastern Syria, and southeastern Turkey) consumed saffron as a medical property as well. Seeing the healing effect of saffron, people gave a magical role to the plant and became more and more interested to use the flower.

However, Saffron was mostly a luxury for nobility outfits and usage. Whether in perfumes, drying clothes, or mixed in bathwater, only kings, queens, other royal companions, and monks could afford to use it.

Besides Greece and Middle Eastern civilizations, there are records of saffron in the historical documents of eastern and southeastern Asia countries. The most historic appearance of saffron in the East Asian cultures is mentioned in Persian records. This is why most historians believe that Persian rulers first introduced saffron into India. It was by then that Kashmiri saffron was introduced in the 6th century BC. Another story, almost from a different angle, tells an Indian missionary sowed the first Kashmiri saffron in Kashmir in the 5th century BC. 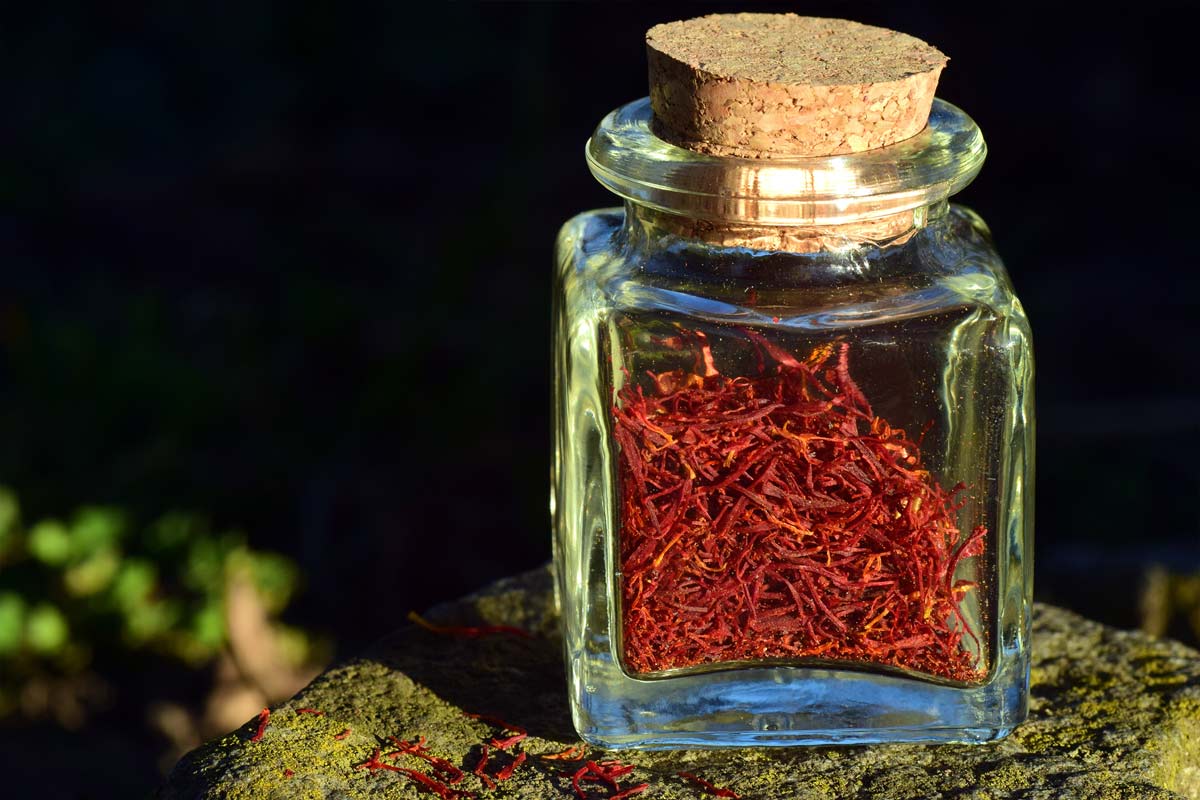 Likewise, there are different stories about the first time that saffron appeared in Chinese culture and cuisine. The most known ones refer to Iran and also Kashmir as the origin of saffron.

No matter where saffron was first cultivated, it soon spread throughout other Asian as well as European countries. It was after Asia that Saffron finds its way to the market of Europe and America.

Read our articles on the benefits of saffron and also the high cost is worth using the spice or not.

The Etymology of the Word “Saffron”

Tracing back the name of saffron, we would get back to the Persian word “zarparān” and the derived Arabic form “za’farān”. In Persian, zar means gold and par means flower blossom. So, the word, “zarparan” may refer to the value of the flower which was as worth as gold. The golden hue and glaze extracted from the stigmas may be the other reason behind the name.

Now, you can find the labor-intensive crop mainly in Iran, Afghanistan, Spain, Morocco, and India. Today, Iran is the main saffron supplier in the world, producing more than 85% of the world’s saffron. The reason may lie in the fact that Iran has a dry and sunny climate which is most suitable for the cultivation of saffron.  However, the cheap labor is an important factor too.

Harvesting saffron is becoming more popular in Afghanistan too. It was an attempt to replace the widespread opium cultivation in the area.

While people mostly consumed saffron as a medicine, it had other usages as a seasoning, dying substance for royal garments and cosmetics, and fragrance.

As an expensive and hard-to-achieve substance, it had a special place among royal families and they exclusively used it. For example, Cleopatra would bathe in a quarter-cup of saffron mixed with milk before meeting her lovers. It was also being used to dye the clothes and hair of wealthy people of the time.

Saffron and its different usage and types

What Are the Benefits of Saffron for Health?

No votes so far! Be the first to rate this post.

About the Author: Zohre Golzade