Skip to content
Home/blog/What Is Saffron Tea Good for?
Previous Next

What Is Saffron Tea Good for?

What Is Saffron Tea Good for?

Saffron tea is made from pure saffron, a spice that comes from a flower called Crocus sativus, mostly known as the saffron flower worldwide. Saffron is known as red gold due to its price per gram. Saffron was first cultivated in Middle-eastern countries and Southwest Asia. The plant is known to grow close to 30 cm, and each plant can bear around 3 to 4 flowers; each flower only produces three stigmas which are known as saffron.

Saffron tea is has gained popularity in Asian and European countries. And it is specifically due to the benefits this amazing flower has. The top 5 saffron-producing countries in the world export over 400 tons of saffron each year, and most of that number belongs to the Iranian saffron suppliers. Iran is considered to have the purest saffron amongst other saffron-producing countries, supplying the market with over 300 tons of saffron each year.

In this article, we would like to talk about Iranian saffron and what is saffron tea good for. 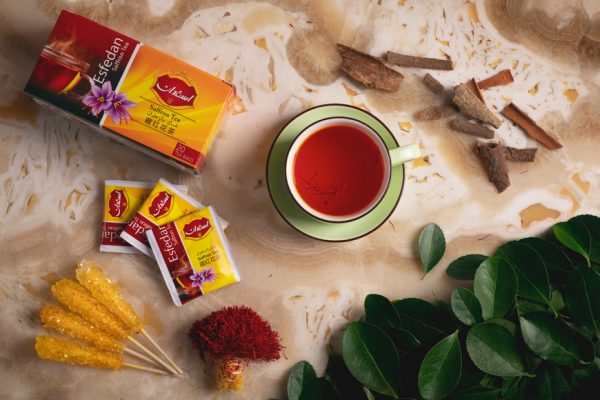 Aside from the amazing taste of saffron tea, especially if the tea is made out of Iranian saffron, tea is filled with amazing vitamins, minerals, and nutrients. Did you know consuming only 2.1 grams of saffron tea has 0.597 mg of Manganese, 2 mg of vitamin C, 0.23 mg of Iron, 6 mg of Magnesium, and 1.50 mg of carbohydrate.

So, what are the benefits of saffron tea?

Researchers are constantly doing research on saffron to find out more information about the most expensive spice in the world. One of the benefits of saffron and Iranian saffron tea is that it is known to help with PMS pain. Saffron is suggested to have properties that can reduce menstruation pain, and it is so powerful that doctors forbid pregnant women to take saffron or drink saffron tea regularly as there have been cases of abortion caused by saffron.

Iranian saffron and, in general, any saffron is proven to have properties that are anti-depressant. Saffron is very effective on the nerves, and it is very calming. Perhaps, the greatest thing about saffron tea and its anti-depressant feature is that it is completely pure and natural. Regularly drinking saffron tea is proven to change your mood throughout the day and make you feel calmer.

Saffron has crocin properties which are known as a chemical component that is naturally grown in flowers. The saffron flower has tons of antioxidants. In addition, the flavonoids found in the saffron flower are known to fight cancer and tumor cells in the human body.

Moreover, saffron tea can decrease the cholesterol levels in the arteries, which is a major feature of saffron tea that has made people worldwide start drinking saffron tea daily. In addition, the properties in saffron help thin the blood and, as a result, helps prevent stroke or heart attack if saffron tea is used more frequently.

How to Prepare Saffron Tea?

To make the perfect saffron tea, you are going to need to buy pure Iranian saffron. Once you have the main ingredient to make the perfect saffron tea, add around 20 Iranian saffron threads to a mug of freshly boiled water. Let them steep for around 10 minutes. Then, remove the saffron thread from the mug, add your favorite tea bag to the mug, let it sit for a few minutes, and remove it. Let your tea cool down, then drink it.