What is Saffron Rock Candy?

In Persian, rock candy is also called Nabat. The history of rock candy went way back in Asia and the middle east when it was first dissolved in tea, but nowadays, it is often used in coffee, milk, water, and any other hot drinks that may need a bit of sugar and flavor. Rock candy also comes with saffron threads; saffron rock candy has the benefits of saffron as well as the rock candy itself. 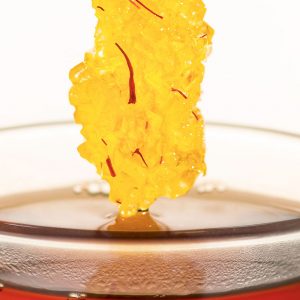 When saffron is added to the product, it gives it more color and makes it more refreshing. In middle eastern countries, saffron rock candy is often used as a table ornament in some gatherings.

Old rock candy crystals appear amazing, however, it’s a warning to avoid these crystals. If there are any chemical compounds found in the rock candy, the elder they become and the more chemical content it shows.

In addition, rock candy that does not contain substances that are addictive dissolves more quickly in hot drinks like black saffron tea, green tea, and so on.